Greetings to you on this fine Tuesday.  I hope your week got off to a great start.  I am currently outside on my deck, bundled up in the November chill – a fleece to warm my body and a cup of tea to warm my soul.  The autumn trees are lovely and I am happy.

Today I would like to take you up into the beautiful Scottish Highlands to a site located about four miles southwest of Aberfeldy, right off of A827.  Our destination occupies a portion of a farmer’s field, actually, so you may want to grab your wellies in case it’s muddy.  Ready?  Great, then let’s be off!

If I were to ask you about stone circles (those mysterious, prehistoric, man-made rock formations commonly found across Northern Europe and Great Britain), I’d wager that the image that would come to your mind would be Stonehenge.  It is one of Britain’s most iconic sites – and of course, the location of one of the Griswold Family’s hilarious misadventures.

Or, if you are a fan of Starz Network’s “Outlander” series, then you would probably imagine Craigh na Dun, the fictional standing stones that transported Claire from the Scottish Highlands in 1946 to the year 1743…and ultimately led her to the man who would become the great love of her life.

Oops, sorry, lost myself there for a second.

Our site today isn’t quite as impressive as Stonehenge or as captivating as the fictional Craigh na Dun, but it is still pretty amazing.  Especially when you take the time to consider the mysterious purposes for which this circular rock structure was built. 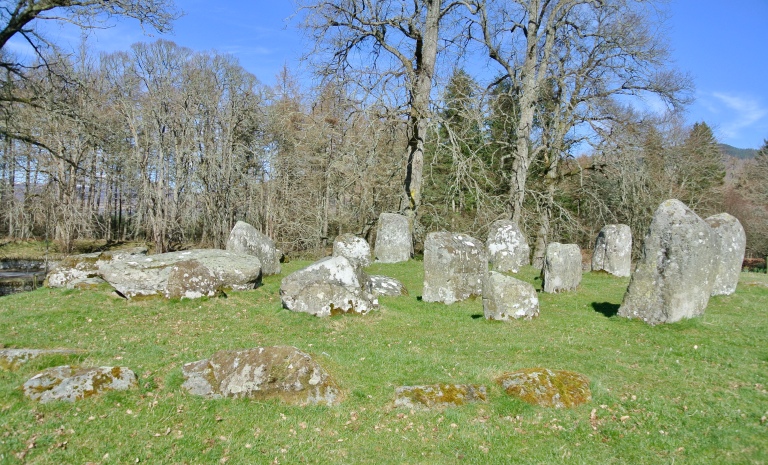 Alternately spelled ‘Croftmoraig’, this recumbent, horseshoe-shaped stone circle dates from the Neolithic through the Bronze Ages.  Shards of Neolithic pottery were discovered on the site and dated to around 3,000 B.C.  Guys, that’s a few thousand years ago!  I can hardly comprehend it. Croft Moraig is one of several ancient sites in the Tay River Valley.  Historians point to this as an indication of how important the area was as a home and transport route for ancient peoples.

“They [recumbent stone circles] get their name because one large stone in the circle is laid on its side, or is ‘recumbent’. We think ancient peoples might have used these circles to record the seasons or the passage of the sun and moon. They may have hosted funerary pyres or ceremonial bonfires. Whatever their purpose, they have fascinated people for generations.”  –Forestry Commission Scotland

Croft Moraig was excavated in 1965 by Stuart Piggott and Derek Simpson. A complex double-stone circle, it was determined that Croft Moraig was built in three separate phases of construction. Each phase may have been spread out by as much as one-thousand years or more.

Archaeologists and historians may never truly understand the purposes for which stone circles were constructed, but some probable theories include:

*a place for worship and/or sacrifice

*burial grounds (human bone was discovered at Stonehenge, for example)

*a place for healing

*a cosmic observatory of sorts – stones aligned to astronomical events

Or, as Mr. C suggested, maybe the ancient peoples were just trying to outdo one another in landscaping their yards!  Silly Mr. C.

Whatever the reasons, stone circles are mysterious, fascinating, and definitely stir the imagination.  I hope you enjoyed our little adventure.

Thanks so much for coming along with me today.  I’ll see you next time when I attempt to make Scotch eggs!  Yikes!  Have a great rest of the week, Friends.