In the spirit of October and upcoming Halloween festivities, I thought it might be fun to do a few blogs this month that highlight some of the weird, dark, and spooky stories of Edinburgh’s past.  Edinburgh’s history is full of accounts of unsavory characters and macabre tales, each with the ability to intrigue and fascinate even the most incredulous among us.  It’s going to be a lot of fun to research and write about them for you.

To kick things off, I would like to introduce you to a man who was (or who was at least in part) the inspiration behind Scottish author Robert Louis Stevenson’s famed 1886 novella,  The Strange Case of Dr. Jekyll and Mr. Hyde.

That man’s name was William Brodie.  Or as he is better known, Deacon Brodie. 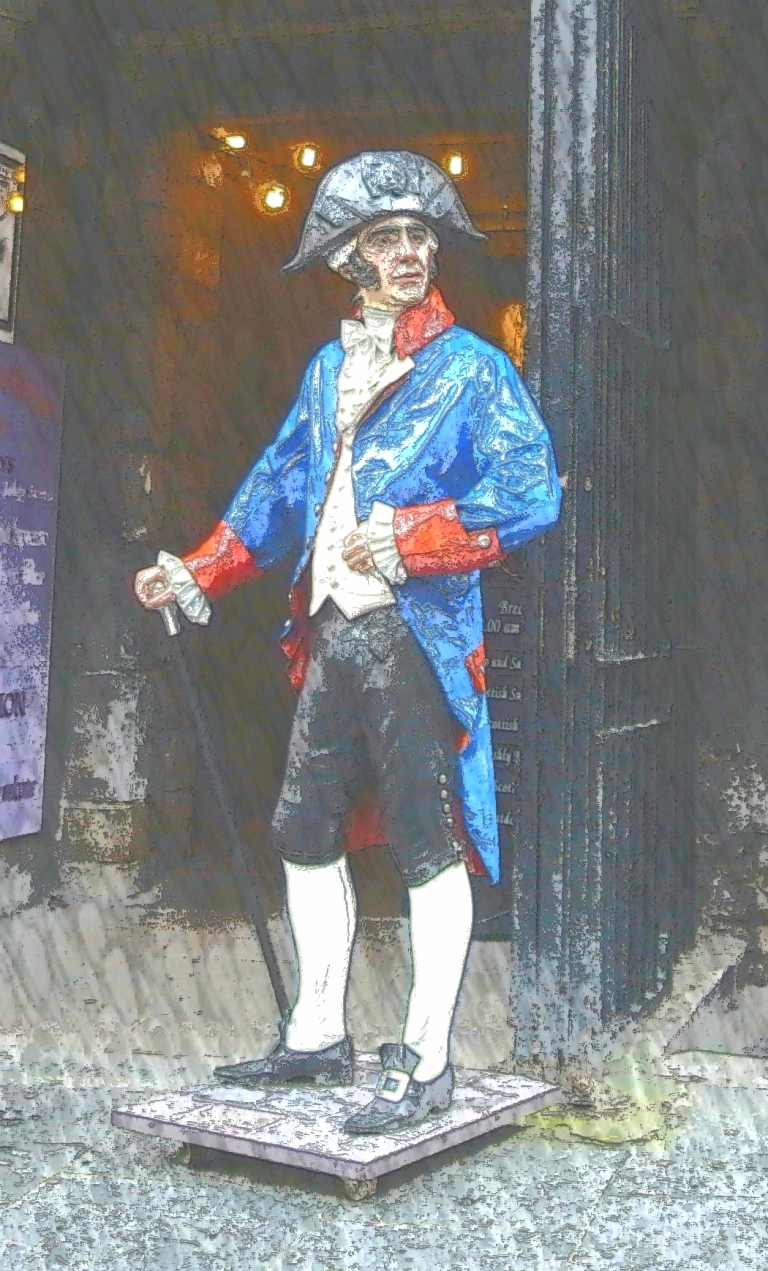 Like his father before him, Deacon Brodie was a skilled cabinet-maker as well as a talented locksmith who resided in the city of Edinburgh during the 18th century.  Mr. Brodie was highly regarded by his fellow citizens as an honorable, moral, and upstanding gentleman of society.  Brodie served as a member of the Town Council

and was deacon of the Incorporation of Wrights & Masons.  People trusted him.  Particularly, those of Edinburgh’s wealthy set who frequently employed him to make and repair the locking mechanisms for their homes and businesses.  Yes, by all accounts it seems that Deacon Brodie was one terrific guy.

Or…then again, maybe not so much.  For you see, in the body of that well-respected man beat a rather nefarious heart.

Deacon Brodie was a thief.  And a big one.  It is said that his thieving career began in 1768 when he copied the keys to a bank door and then returned later, hauling off with £800.  That must have given him quite a rush, because for the next twenty years or so he used his advantage as a locksmith to make copies of the keys to the homes and businesses of the wealthy in which he worked.  He disguised himself and in the

cover of darkness would return and burgle them.

Brodie’s naughty habits went far beyond just thieving, however.  He spent many a-night in houses of ill repute, pubs, and gambling dens.  He had two mistresses, produced several illegitimate children, and found himself with a major gambling problem.  Despite having inherited a large sum upon his father’s death, Deacon Brodie seems to have found himself in an addictive cycle-steal, spend, gamble, and steal some more.  It makes me wonder if he ever regretted his choices or wished he could stop.

Perhaps Brodie’s greatest regret came in 1786 when he teamed up with John Brown (a known thief), George Smith (a locksmith and grocer), and Andrew Ainslie (a shoemaker).  All four men operated together as a gang of burglars.  This continued until one fateful night when the gang attempted to carry out a plot to perform an armed raid on His Majesty’s Excise Office in Chessel’s Court in the Canongate.  There are a couple of different retellings at this point about how it all went down that night, but essentially the bottom line is that the heist was unsuccessful and John Brown tattled.  Enticed by a reward offered by the authorities for information in solving the crime, Brown ratted out both Smith and Ainslie as the culprits and both were duly arrested.  Some friend!  Brown did not name Brodie and Brodie was able to escape to the Netherlands.

Luck did not prove to be on his side, however.  Brodie’s past finally caught up to him and in 1788 he was arrested and returned to Edinburgh to stand trial.  The jury found poor old Mr. Brodie guilty and his execution was set for October 1, 1788 at the Tolbooth.

But this strange story doesn’t end just yet.

As the story goes, a massive crowd of some 40,000 people turned out to see Deacon Brodie hanged.  And ironically, not just on any gibbet, but on one that he had designed himself!

Mr. Brodie, audacious even to the end, bribed the hangman into agreeing to help him survive his execution.  One account of the story says that he wore a steel collar and was fitted with a tube-like contraption that would prevent him from fatality.  Sadly, for Brodie, it didn’t work and after the hanging he was pronounced dead.  That’s one way to break a bad habit! (sorry, bad hanging joke haha)

Whew, what a story.  The real life Jekyll & Hyde.  I love tales such as these.  Hope you had a little fun with it too.

I look forward to our next story and hope to see you again soon!