Pull up a chair and let me tell you a story about a woman named Maggie.  Maggie Dickson, that is.  Or as history remembers her, Half-Hangit Maggie.

Maggie Dickson was born in Musselburgh, Scotland in the very early part of the 18th century.  For reasons that are unclear, her husband left her, and she was forced to look for work elsewhere. Fortunately, as good luck would have it, she was able to find work at an inn in Kelso located in the Scottish Borders.

Things were humming along quite nicely until Maggie became involved with the innkeeper’s son.  And, well, you can probably imagine what happened next.  Yep.  Maggie became preggers.

Not wanting to jeopardize her job, she made the decision to conceal her baby bump.  The months ticked by and sadly, her baby was born premature and died.  Still trying to conceal the pregnancy, Maggie decided to place the little body in the nearby River Tweed.  She couldn’t go through with it, though, and chose instead to leave the baby on the bank of the river where, of course, it was discovered.  Maggie’s secret was uncovered and she was arrested for concealing her pregnancy.  It’s likely that she was also accused of killing the child, but accounts of the story differ.

Maggie was taken to Edinburgh where she was tried and convicted for her crime.  On September 2, 1724, poor Miss Maggie was hanged in the Grassmarket.  She was pronounced dead and placed in a coffin to be sent back to Musselburgh.

But, lo and behold, you’ll never imagine what happened next.  On the route to Musselburgh, her party heard a banging coming from the inside of the wooden box. Imagine their fright! Well, upon further inspection, it was discovered that Maggie was not, in fact, dead, but very much ALIVE!   The law deemed it to be God’s will that she survived the gallows and our Maggie Dickson went on to live another 40 years.

From then on she was known around town (Scotland?) as Half-Hangit Maggie and her story is still told with gusto today.  In fact, if you fancy it, there is a pub named in her honor in the Grassmarket near to where it all went down.  If you go, lift a pint in her honor and cheers the woman who somehow, quite miraculously, managed to survive her own execution. 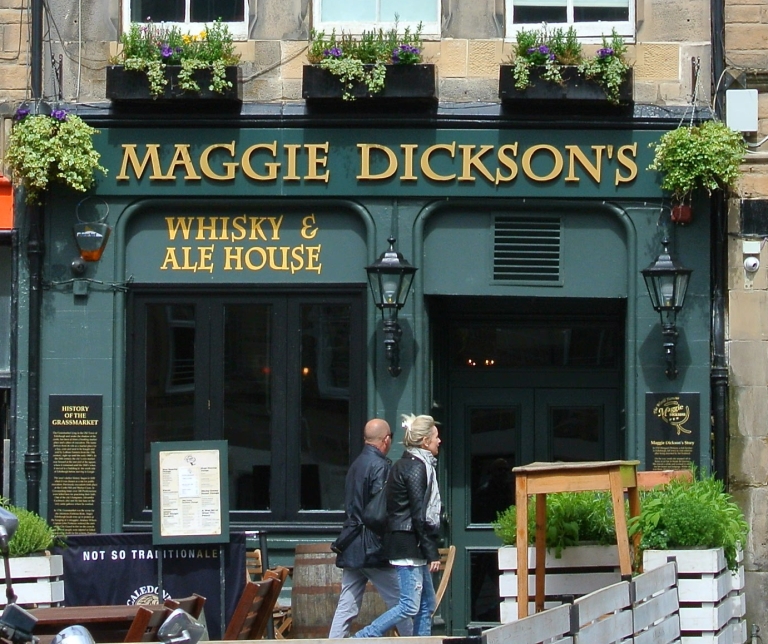 Cheers, Maggie!  And to you too.

One thought on “Half-Hangit Maggie”