Hey there, Friends!  Good to see you again.

In typical fashion, Mr. C and I were late to the game.  A few weeks ago on a lazy vacation day in Kentucky, we discovered the comedy series “Parks and Recreation” produced by and starring Amy Poehler.  Never mind that the show ended like three and a half years ago, but hey.  We’re not big television watchers and it takes a lot in a show to impress me and hold my attention, but boy when I find a show that does both, I’m ALL in.  Smart, witty, hilarious, and occasionally quite poignant and touching, I think “Parks and Rec” knocked it out of said park.

The show’s characters are an extremely eclectic bunch and I get such a kick out of them all!  But it’s Ron Swanson – that deadpan, highly private, masculine, meat-eating, whisky-loving, mustache of a man who I adore the most.

In direct contrast to Poehler’s character Leslie Knope who is perpetually sunny, optimistic, extroverted, hardworking, and a staunch believer in big government, Ron is distant and reclusive, he seldom expresses emotion (although he occasionally gets the giggles), and is a libertarian who believes strongly in small government.  Despite these traits and claiming that he has no interest in the personal lives of those around him, Ron actually cares a great deal for his colleagues and often helps them in spite of himself.  In particular, he has a deep and profound respect and affection for Leslie.

In Season Six, the cast goes to London and begrudgingly, Ron tags along.  His new bride Diane was supposed to have accompanied him as a honeymoon of sorts but she gets terrible morning sickness and stays home.  She insists that Ron go anyway so he can take pictures for her.  Because his “love for Diane trumps his hatred for Europe” (remember, libertarian), he goes with the group even though he makes it clear in that deadpan voice of his that, “All of this could have been avoided if we’d followed my plan for a honeymoon.  A steak dinner, a glass of Lagavulin whisky, then vigorous lovemaking for two hours, and we’re both asleep by 8:30.”

God, I love this show.

So, you’re probably wondering why in the world the show made me cry.  Well.

While the group is in London, Leslie – who holds a mutual affection for Ron and is always finding sweet and creative ways to make her friends happy – hands Ron a little journal as a belated wedding present.  It contains a train ticket.  Ron’s response is, “You think I want to extend my stay on this godforsaken continent?”  Leslie tells him that if he follows the itinerary to the letter, he will not be disappointed.

Fast forward and we see manly Ron, little journal in hand, making the journey by train to the unknown destination.  “Where the hell are you sending me, Knope?”, he asks out loud.  As the episode nears the end, after Ron has made the long crossing by rail, foot, and boat, he finally looks up and discovers where it is that Leslie has sent him.  The Lagavulin distillery on the Scottish island of Islay – the place where his favorite whisky in the entire world is produced.  That big mustache turns up in the sweetest smile and you smile too.  The man who doesn’t usually show emotion is clearly touched.

Then, to the sound of soft bagpipes in the background and with scenes of a happy Ron touring the distillery, he tells us that he has “finally found a place in Europe that is worth seeing – the tiny islands off the coast of Scotland, where God’s chosen elixers are distilled, barreled, and prepared for consumption.” This, he says, is worth the trip.

The bapgpipes continue to play and the scene concludes with Ron perched on a cliff side holding the little journal.  Per Leslie’s instructions, he reads aloud a poem by Scottish poet Robert Burns while simultaneously, we see footage of him on the beautiful island.  At the conclusion, Ron is moved to near tears, clearly overwhelmed by it all. 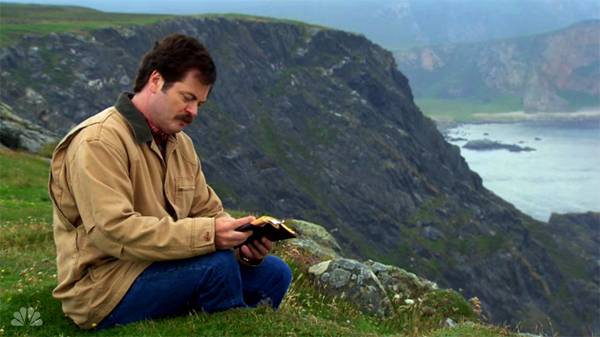 O, Were My Love Yon Lilac Fair, by Robert Burns

O were my love yon Lilac fair,
With purple blossoms to the Spring,
And I, a bird to shelter there,
When wearied on my little wing!
How I would mourn when it was torn
By Autumn wild, and Winter rude!
But I would sing on wanton wing,
When youthful May its bloom renewed.

O if my love were yon red rose,
That grows upon the castle wall;
And I myself a drop of dew,
Into her bonny breast to fall!
O there, beyond expression blest,
I’d feast on beauty all the night;
Sealed on her silk-soft folds to rest,
Till flied away by Phoebus’ light!

At this point in the show, as character Cris Traeger would say, I was LIT-erally in tears.  Call me crazy. Call me a sentimental fool.  I just really miss Scotland, you know?  Mr. C and I had already been planning a return trip in the spring, provided the whole Brexit thing doesn’t derail our plans. We were actually sort of waiting to see how it plays out before making final arrangements.  But after that “Parks and Rep” episode (and perhaps a bit too much whisky?), we said ‘screw it’. That is what trip insurance is for after all.  So I got on the computer stat, found cheap airfare, a wonderful place to stay, and marked the calendar.

So cheers, Ron Swanson.  Cheers Leslie Knope.  And cheers to you, Scotland.

We’ll see you in the Spring.