“Mary, Queen of Scots entered the room where she would be executed. She told her friends and servants to ‘rejoice rather than weep for that the end of Mary Stuart’s troubles is now come … tell my friends that I die a true woman to my religion, and like a true Scottish woman and a true French woman.’

Mary was disrobed; her black garments were removed, revealing an outfit of deep red – the Catholic colour of martyrdom. She knelt down on a cushion, resting her head on the block, before stretching out her arms and crying in Latin “Into thy hands, O Lord, I commend my spirit.” The axe came down, but landed on the back of her head rather than her neck. A second blow cut into her neck but a third was required to sever the head completely.

When the executioner lifted Mary’s head it tumbled onto the stage, leaving him holding her wig. Her hair was short and completely grey due to years of stress as a prisoner. A final surprise was waiting for the executioner – Mary’s little Skye terrier had been hiding under her skirts, soaked in blood.”  –Laura Brown, Historic Environment Scotland

Hello again, my friends.  I hope this day finds you well. I also hope that you are not too annoyed with me if ‘Proud Mary’ has gotten stuck in your head.  That song has been playing on a continuous loop in mine for the last two weeks! Perhaps publishing my article today will be the magic that makes it quit.

So, today we are going to pick up where we left off in my previous blog about the life of Mary, Queen of Scots.

At the conclusion of Proud Mary-Part 1, we saw a grieving, young widow return to Scotland to reign over her home country alone.  Still mourning the loss of her French husband, King Henry II, Mary (a Catholic) now found herself at odds with a predominantly Protestant nation.  Many felt that the best chance for the country’s stability depended upon Mary marrying a man of the Protestant faith.  Mary fell in love with her cousin, Henry, Lord Darnley, and five years after the death of her first husband, she married once again.

But kind of like the the Ford Pinto of the 70’s or the Yugo of the 80’s, Lord Darnley turned out to be a bit of a lemon.  Reportedly spoiled, petulant, jealous, and given to carousing – basically a man of poor character – Darnley was never given any real authority.  Mary abandoned her plans to crown him as king and his arrogance and behavior put a terrible strain upon the marriage.

Darnley’s jealous behavior came to a head in March, 1566 after Protestant lords (and the nobles who had formed a rebellion against Mary in ‘The Chaseabout Raid”) influenced him to enter into a secret conspiracy with them to murder David Rizzio, Mary’s private secretary and BFF. The nobles felt that Rizzio had too much influence on Mary’s foreign policy and Lord Darnley had long been suspicious that Rizzio and Mary were more than just friends (in fact, the rumor mill speculated that Mary was carrying Rizzio’s child!). 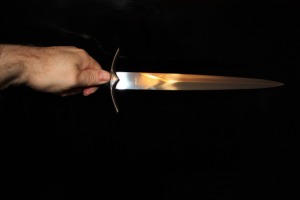 So, in front of a six-month pregnant Mary who was dining with friends at Holyrood House in Edinburgh, Darnley and his cronies dragged David Rizzio away from the table,
into the next room, and brutally murdered him.

Still reeling from the murder of her friend, Mary gave birth to a son a mere three months later, on June 19, 1566.  And not just any son, but the future King James VI of Scotland and I of England .  To the dismay of the Protestants, wee James was baptized into the Catholic faith at Stirling Castle in December, 1566. Apparently,  Lord Darnley did not attend the ceremony.

What do you think?  Wild ride so far?  Buckle up.  There’s more.

In the most mysterious of circumstances, Henry, Lord Darnley met his end on February 10, 1567.  In the early morning hours, the home at which Darnley was staying (Kirk o’ Field) was rocked by a massive explosion.  Darnley’s body and that of a servant were recovered in the garden, however, it was discovered that they had not been killed by the explosion.  Rather, they had been strangled!  Young Mary was now a widow for a second time.

This is where Mary’s story really begins to get complicated and just as I said in Part 1, sometimes deciphering fact from tale or opinion can be a bit of a challenge.  I will do my best to only provide you with those points on which multiple sources are in agreement.  If you want the finely detailed and verified facts on all things political, you’ll just have to wait for my book (just kidding).

Some historians speculate that by this point, Mary had formed a close relationship with a man named James Hepburn, 4th Earl of Bothwell.  Bothwell had been involved in aiding Mary after the death of her Italian secretary and some believe that the pair may have been lovers.  Scandal!

The question as to who murdered Lord Darnley loomed and not even Mary was above suspicion. Darnley’s influential family, however, accused Mary’s friend Bothwell in the assassination, claiming that with Lord Darnley out of the picture, Bothwell was free to pursue a marriage to Mary.  As the chief suspect, Bothwell was tried for the crime in April 1567 but was subsequently acquitted.  The question of ‘who done it’ remains to this day.

Shortly after Bothwell’s acquittal, Mary – who was returning to Edinburgh following a trip to visit her son – was intercepted on the road and abducted by Bothwell and his men.  He took her to Dunbar Castle (where sources say he may have forced himself upon her).  Because the exact nature of their relationship remains unclear, it is not known if Mary’s abduction was by force or if it was a pre-planned agreement between the two.  In any case, the pair were wed

I don’t know if our Mary had poor taste in men or if she was just unlucky in love, but her marriage to Bothwell also soured.  Are we surprised?  Their relationship was tempestuous and proved to be deeply unpopular in the eyes of both Protestants and Catholics.  Ultimately, an army was raised against them.  Bothwell fled and Mary found herself imprisoned at Lochleven Castle where she miscarried twins (could Bothwell have been the daddy?).  Mary was given a choice – abdication or death.  She chose abdication and her infant son James became the new sovereign – King James VI of Scotland.  Bothwell by this point had been forced into exile and would eventually die in a prison in Denmark (driven to insanity).

Mary had the heart of a fighter, though, and her pride would not be taken from her.  On May 2, 1568, the still twenty-something escaped from Lochleven Castle and raised a small army.  Unfortunately, her army was defeated in the Battle of Langside and Mary fled to England into what she hoped would be the protective arms of her cousin, Queen Elizabeth I.

It was Mary’s hope that Elizabeth would be sympathetic to her cause.  But, if you’ll recall from Part 1, there had alway been conflict over to whom the crown belonged. Many Catholics felt that as the senior descendent of Henry VIII’s eldest sister, that Mary was the rightful ruler of the throne.  Elizabeth (obviously) saw Mary as a tremendous threat and over the next nineteen years kept a watchful eye on her by holding her captive in various castles throughout England.

During the years of Mary’s captivity, Elizabeth’s fears were realized, as Mary was found to be involved in numerous plots for assassination.  The big question remains: Was Mary tricked into expressing her support for this effort or was it a deliberate attempt to dethrone her cousin and claim the kingdom for herself?  Maybe one day history will be able to give an answer.

Whatever Mary’s intention (or lack of intention), she was and would always be perceived as a threat to her cousin.  So, in October 1586, Mary, Queen of Scots was tried for treason and condemned to death.  She was taken to Fotheringhay Castle and on February 8, 1587 – at the age of just 44 – was executed.

Poor Mary.  What had begun as a promising life and a bright future had turned into a tragic chain of events and a sad reflection of the time in which she lived.  The questions remain. Was Mary a misguided martyr, swept up in the political and religious frenzy of her day?  Or was she a Jezebel, scheming and dabbling in murder to achieve her goals? That is a question that perhaps only Mary herself could answer.

only a short distance apart.