Last week I mentioned to you that I had a guest blogger lined up for this week, but due to unforeseen circumstances (tell you about it later), I had to mix things up a bit.  So…we are going to cook today instead!

If you stopped by last week, then you know that Mr. C and I recently took a trip to Lexington, Kentucky to celebrate our anniversary.  During our visit, we toured three different bourbon distilleries (Buffalo Trace, Maker’s Mark, and Woodford Reserve).  Each of the tours concluded with a tasting and we were offered a bourbon ball made with whiskey from that particular distillery.  All were delicious but Mr. C and I both agreed that the bourbon balls at Buffalo Trace were AH-MAZING.  I did a little poking around on the internet when we got back and found a recipe that is supposed to be very similar to the candies invented in 1938 by Ruth Booe, the founder of Rebecca Ruth Candy Factory in Frankfort, KY.  This is the candy company that today makes the bourbon balls for purchase at Buffalo Trace.  Perfect!

Because I write a blog about Scotland and not about Kentucky, I decided to give these a try using Scotch rather than bourbon (whisky with a “y” as opposed to whiskey with an “ey”).  Mr. C suggested that I use BenRiach 10 year old (a Speyside Scotch) which I discovered was an excellent choice given that it is aged in ex-bourbon and ex-sherry casks, lending it the perfect sweet flavor.

(adapted from a recipe for Kentucky Bourbon Balls at Let’s Eat Cake), makes 35-40

3.  Scoop into 1″ balls and place on a baking sheet lined with parchment or wax paper. 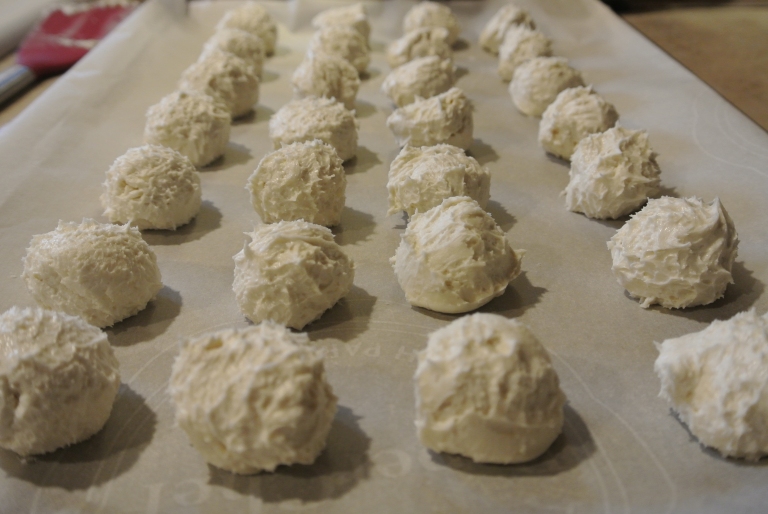 4.  Place baking sheet in the freezer for at least 45 minutes.

5.  Melt chocolate and coconut oil in either a small crock pot or in the microwave.  Stir  frequently.

6.  Insert a toothpick half way into the frozen ball and dip it into the melted chocolate. 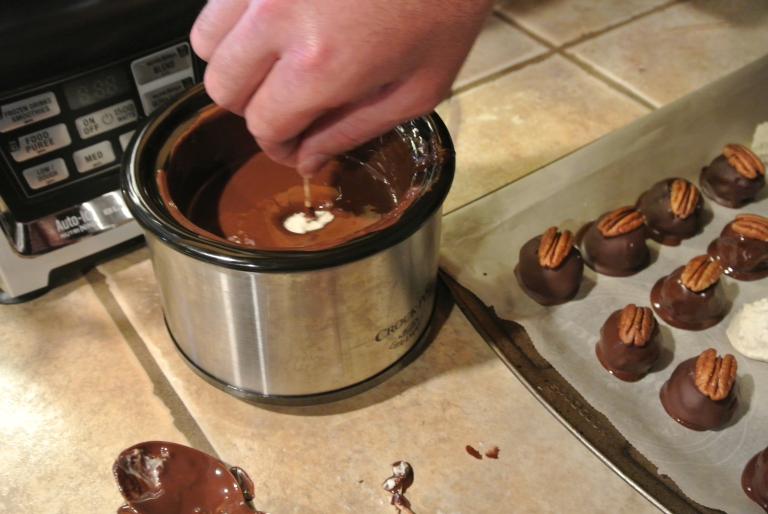 7.  Using a second toothpick or fork to steady the whisky ball, remove the inserted toothpick with a gentle, twisting motion.

8.  Top with a pecan.  Let cool completely and enjoy!

Make sure the whisky balls are pretty frozen before you begin dipping them in chocolate. Otherwise, they may slide off the toothpick and plop right into the good stuff.  Learned that one the hard way.

When it’s time to dip the balls in chocolate, only work with half the batch to begin with, leaving the rest in the freezer.  We discovered that by the time we got to the thirtieth ball, they had thawed and were beginning to get ooey-gooey.  You’ll find the dipping process to go much easier if they are frozen.

I think these will store best in the refrigerator, as the filling becomes quite soft at room temperature.

These are absolutely amazing!  There was a bit of moaning and oohing and ahhing in my house as these were being consumed.  I’ll need to practice a little more to get the hang of the dipping process so they aren’t quite so sloppy, but overall I think they turned out pretty darn good.

If you make them, let me know how it goes!

Have a fab week, everyone.